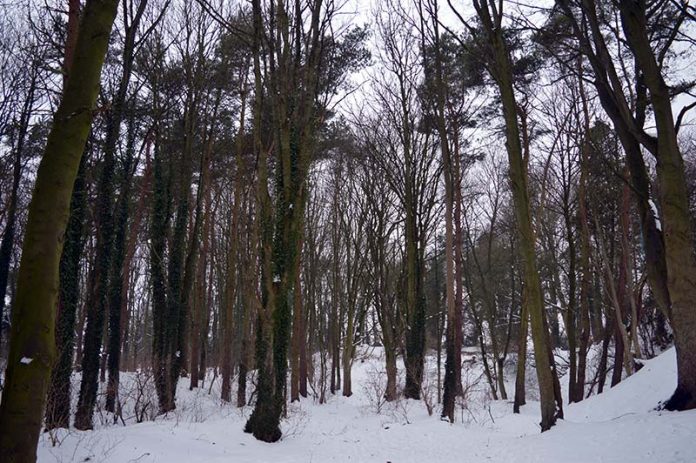 The Beast from the East hit us pretty bad this week with temperatures plummeting into the minuses. Public transport ceased while local schools and leisure centres closed their doors until the weather perked up. People have been stranded on motorways and abandoned their vehicles, it’s crazy!

I however, have enjoyed a nice relaxing week off after both my places of work were forced to close because of the weather. You can guess what I did with my time: snowy walks with the pup and family.

Even my dad came out with us and he never comes on dog walks, though I think that had something to do with my dog’s obsession with burying himself under the snow (he’s not even a husky). It’s hilarious apparently, although not when you get him home and he jumps all over the sofa!

But in all, my week’s been great fun with my dog. We’ve been able to go on long walks and discover new locations for more blogs, so keep an eye out! Anyway, let’s get down to business, because I could mutter on about my dog and his weird habits all day.

So yet again Coundon has had the privilege of being submerged in snow and looking again like a scene from a fairy tale. Fields were knee high with snow but luckily I had my wellingtons on, so the snow only just tipped over the top.

My parents’ dog, a Staffordshire Bull Terrier cross Rhodesian Ridgeback, kept disappearing every time we threw his stick across the field. The snow was incredible, and so deep it turned what would normally be a half hour walk into over an hour.

It was exhausting and freezing, but great fun.

One particular location I thoroughly enjoyed this week, which I would normally hesitate to go to is Coundon Woods. We’ve all heard the horror stories of Coundon Woods being haunted and other negative stories of a more grounded nature related to the local human wildlife, but it’s actually a remarkable, misunderstood little woodland right on our doorstep which has been abandoned to rumour and exaggeration.

It’s no lie that Coundon Woods has been neglected. It has so much potential for wildlife; paths could be better maintained and more barriers added to prevent quads and dirt bikes from entering. It’s such a shame, this small woodland could really benefit from some much-needed TLC.

For those of you who haven’t been to Coundon Woods and fancy a look, there are two available entrances along public footpaths which pass through agricultural fields.

If you’re heading to the woods from Coundon along the B6287 just before you leave Coundon, there’s a right hand turn which brings you out onto Durham Road next to the Park Head hotel. Along that road you can find the entrance to the woods on the left-hand side of the second field to your right. In other words, look for the one field which doesn’t have a gate on it, there’s an obvious pathway down towards the woods. You can’t miss it.

The alternative entrance can be found along Durham Road as you head north towards Spennymoor from New Coundon. This entrance is a little easier to spot as it has a public footpath sign sticking out of the trees. On the opposite side of the road to the entrance there’s a lay-by for those who would rather take a car than walk the extra mile or so.

As you walk along this entrance it brings you into another agricultural field. Remember to stick near the fence line so not to disturb any crops which might be growing there. Of course, if its weather like this you don’t need to worry about that.

Along the opposite side of the field, a bit to the left, there’s a stile which brings you into another field. Be cautious in this field, there are usually horses so keep control of any dogs you have with you. Immediately to your right as you cross over the stile is another stile where you cross to get into the woodland. From there you’re faced with two options again: left or forward. Left takes you into the centre of the woodland while forward brings you out at the first entrance.

So now we know how to get in, let’s explore!

The woodland is full of steep hills and fallen trees. It’s a fantastic place to go exploring with the little ones or, in this weather, to go sledging. We found an abandoned sledge while we walked the dogs through the woods and I couldn’t pass up the opportunity!

During the spring and summer time when the trees are full of life, the woodland loses a lot of light, meaning there isn’t too much vegetation growing at ground level; unfortunate for wildlife but good for us to safely walk through without getting lost.

For kids who fancy a go at mountain bike riding, Coundon Woods is an ideal starter location.

The woodland isn’t very large, you can see one end from the other, but you can still lose your bearings now and then. Luckily because of its size you needn’t worry, you can’t get lost. As you walk through the woods there are various trails leading all over the place, mainly created by quads and dirt bikes driving around and carving new paths everywhere. Thankfully, police have begun to crack down on anyone using off road vehicles in the woods so you’re unlikely to come across any, and if you do you’ll hear them long before they arrive.

For kids who fancy a go at mountain bike riding, Coundon Woods is an ideal starter location. It’s quiet and the trails are much safer than the official mountain bike trails you see around Hamsterly Forest. Or, if you merely fancied a wander out, Coundon Woods is a nice location where you can experience some quiet contemplation while potentially catching sight of an elusive badger.