Festive revellers are being urged not to walk home along rivers, and to look out for their mates.

The Safe Durham Partnership (SDP) is issuing advice to people who will be heading out to celebrate Christmas and New Year in the county, amid figures which show people who have had a drink are at increased risk of accidental drowning.

In County Durham, there were eight accidental drownings over the four year period linked to alcohol or drugs, 38 per cent of the total number.

Figures from the National Fire Chiefs Council also show that accidental drownings are not just a summer occurrence, with 18 reported nationally in December last year.

While figures show there have been no water related fatalities in County Durham and Darlington in 2017, the SDP, and its sub-groups the Durham City Safety Group and the Open Water Safety Group, are now issuing advice to Christmas partygoers, in support of the RLSS’s national Don’t Drink and Drown campaign.

It is:
• Don’t walk home near water, you might fall in.
• Look out for your friends, make sure they get home safely.
• Don’t enter the water if you have been drinking.
• Alcohol seriously affects your ability to get yourself out of trouble.

Kevin Lough, chair of the open water safety group and occupational health and safety manager at Durham County Council, said: “Christmas and New Year are of course times where people love to go out and enjoy themselves and we hope everyone has a great time.

“And while we don’t want to be killjoys, we would just ask people not to walk home along rivers if they’d had one too many as they’ll be at increased risk of falling in – and will also find it harder to get out.

“The same applies if someone you’re out with has had too much to drink – please make sure they get home safely.

“Finally, this might seem obvious but please do not go into a river in any circumstances, they are extremely dangerous and unforgiving environments.”

Andrew Allison, community safety manager at County Durham and Darlington Fire and Rescue Service, added: “At this time of year the conditions around open water tend to get worse, so river banks become slippy and paths can have icy patches.

“This can make it tricky for people under the influence of alcohol, walking their dogs, jogging or doing other activities anywhere near open water.

“We ask everyone to take extra care around water, particularly when it is dark.

“Why not try some new routes that don’t go so close to water and think about buddying up so that you are not alone if something did go wrong.

“You could also carry a torch and wear some bright clothing so that you can see and can be easily seen.

“It is also good to let someone know your expected route and how long you expect to be out and about to help them raise the alarm if something goes wrong.”

The SDP supported last year’s Don’t Drink and Drown campaign, with representatives from the council and the fire service visiting licensed premises in Durham City and Chester-le-Street to pass on safety advice.

Advice was also given out to the general public at a Don’t Drink and Drown stand in Durham Market Place. 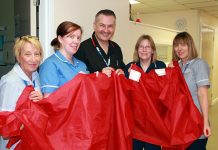