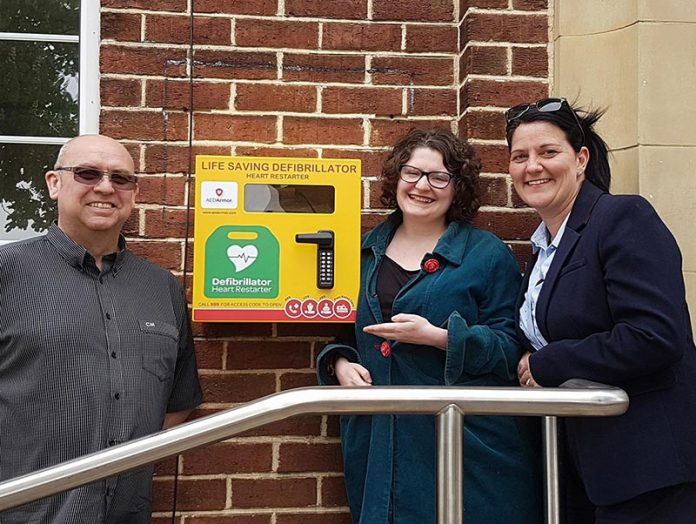 A network of lifesaving defibrillators has now been installed in and around a local village.

Cllr Stuart Dunn and Cllr Maura McKeon have worked in partnership with Kelloe, Coxhoe and Croxdale Parish Councils to complete the installation of four defibrillators across the area.

Nicola Dodsworth, Coxhoe Village Hall secretary, started the campaign to have the machines fitted after the tragic death of her friend Gemma Robson.

She said: “Unfortunately the idea was borne out of a tragedy. Gemma, whom I had known for a lot of years, sadly passed away after suffering a heart attack in the local pub.

“The devastation to Gemma’s family and friends was there for all to see and I thought about what we could do as a community to help prevent such a sad loss in the future.”

It is hoped that during an emergency the defibrillators will allow quick access to potentially lifesaving treatment.

Cllr Dunn and Cllr McKeon both contributed £2,854 from their neighbourhood budgets to support the scheme. This was supported by further contributions from the parish councils and also donations from local traders.

Nicola added: “I was delighted with the response from the local community, the parish council, county councillors and some of the businesses who freely donated towards something we all hope we never need.

“I am pleased for the community that we have been able to provide this life critical support which may save someone’s life.”

The defibrillators have been installed close to areas that are used regularly by residents and sporting groups. This includes Croxdale Community Centre, Kelloe Working Men’s Club, Quarrington Hill and District Social Club and Coxhoe Village Hall.

Awareness and training sessions will be facilitated in the future by the parish councils with support from the North East Ambulance Service. However, residents should be assured that the machines are easy to use without receiving training.

“Providing this lifesaving piece of equipment for our communities is something which we want to promote and continue to raise awareness of. We need to ensure that our residents know where the defibrillators, however it is just as important to know that this equipment is easy to use and there should be no hesitation in any of us using them”.